Two record flights with the STEMME S12 - by Gil Souviron

I became a glider pilot at the beginning of the eighties, but after starting my own company and having limited time, I dove into hang gliding with my brother. I came back to gliders in 2015, and wanted to find a glider that could fufill my dreams.

I was interested in the possibility of a glider to explore vast territories. First, I knew autonomy was mandatory for me. Previously, I was familiar with the Stemme S10VT, but discovered the S12 had better performance and a fantastic range. Because I was living near Perpignan at the time, my game park enlarged from Vienna to Ourzazate thanks to the S12. I could be anywhere in Europe or Morocco in just a few hours! So, I immediately ordered an S12, which I received on the first day of confinement in France.

I started to complete many flights. I flew to Strausberg and back to Perpignan, and started to explore the Pyrenees and Massif Central. I studied the tracks a lot and began to understand just how fast I could fly in the waves, and how big the curcuits could be.

The weather forecast on March 17th was pretty good, with 80 km/h winds from the Northeast and no clouds on the central part of the Pyrenees. I had already completed some 1400 km flights, so I decided to extend to 1515 km in 3 points. I started to fly towards a small mountain near the sea, which normally provides very good lift. The light and clouds were fantastic. The flight ended up being quite easy due to my higher altitude and knowledge of the mountains.

The forecast for March 21st was even better, with stronger lift. I called Baptiste Innocent to come with me this time. He was happy to join me due to my success on the March 17th flight. We immediately decided to go for 1600 km in 3 points. The problem was that we had to fly to Pamplona two times, but this turn point was 50 km away from the last wave spot. This meant we had to do 100 km on the glide at each west turn point. Because the S12 has fantastic glide range, we did some extra kms to complete a larger circuit.

We flew fast and properly with very few mistakes and were surprised to have two more hours of daylight after arriving near the sea at 1600 km. I asked air traffic control to fly up to FL245 instead of FL195 to make a point 50 miles over the sea. We received immediate authorization and started the glide.

The possibilities are endless, like going to La Coruna, or to Almeria and Morocco. It is a unique experience. 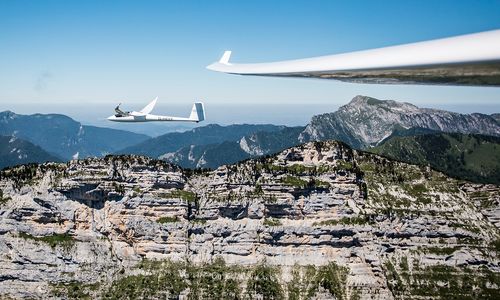 As the person responsible for the safety of our Stemme AG aircraft, both development (Chief Executive EASA 21J) and production and maintenance (EASA 21G and Part 145), I naturally follow how our aircraft are doing in the field and how this is communicated in relevant forums, e.g. teh Stemme Owner Group (SOG).
Read more